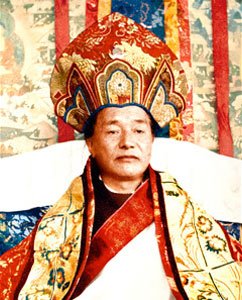 Dudjom Rinpoche (1904-1987) was one of Tibet’s foremost scholars and meditation masters. Considered to be the living representative of Padmasambhava, he was a prolific author and revealer of the spiritual treasures (terma) concealed by Padmasambhava.

A prolific author and meticulous scholar, Dudjom Rinpoche wrote more than 40 volumes. Over the last decade of his life he spent much time teaching in the West, where he helped to establish the Nyingma tradition, founding major centres in France and the United States.

Sogyal Rinpoche served as his translator and assistant for many years.