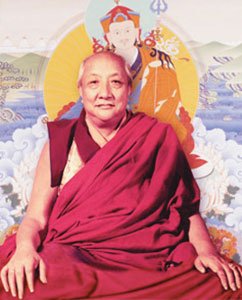 Dilgo Khyentse Rinpoche (1910-1991) was one of the closest disciples of Jamyang Khyentse Chökyi Lodrö, and one of the last great masters to have completed his entire training in Tibet.
He was regarded by many as one of the greatest Dzogchen masters of the 20th century, the very embodiment of Padmasambhava, and he was the teacher of many of the important lamas of today.
In addition to his tireless teaching activity, Khyentse Rinpoche supervised an exceptional publishing programme, making available over 300 volumes of teachings.
The destruction of so many texts during the early 1960s in Tibet meant that by taking such pains to publish them, Khyentse Rinpoche ensured their survival for future generations.