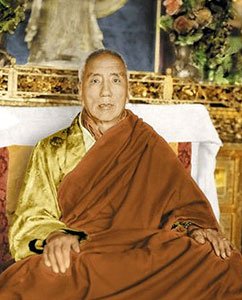 Jamyang Khyentse Chökyi Lodrö (1893-1959) was the most outstanding Tibetan master of the last century, and the teacher of many lamas who were to teach in the West.

An authority on all traditions, and holder of all the lineages of Tibetan Buddhism, he was the heart of the Rimé movement in Tibet. This was a kind of spiritual renaissance, which rejected all forms of sectarian, partisan bias, encouraging each tradition to master completely the authentic teachings and practice of its own lineage, while at the same time maintaining a spirit of openness, harmony and co-operation with other Buddhist schools.

Jamyang Khyentse was the master who recognized Sogyal Rinpoche as the incarnation of Lerab Lingpa Tertön Sogyal. He supervised Rinpoche’s training and raised him like his own son.